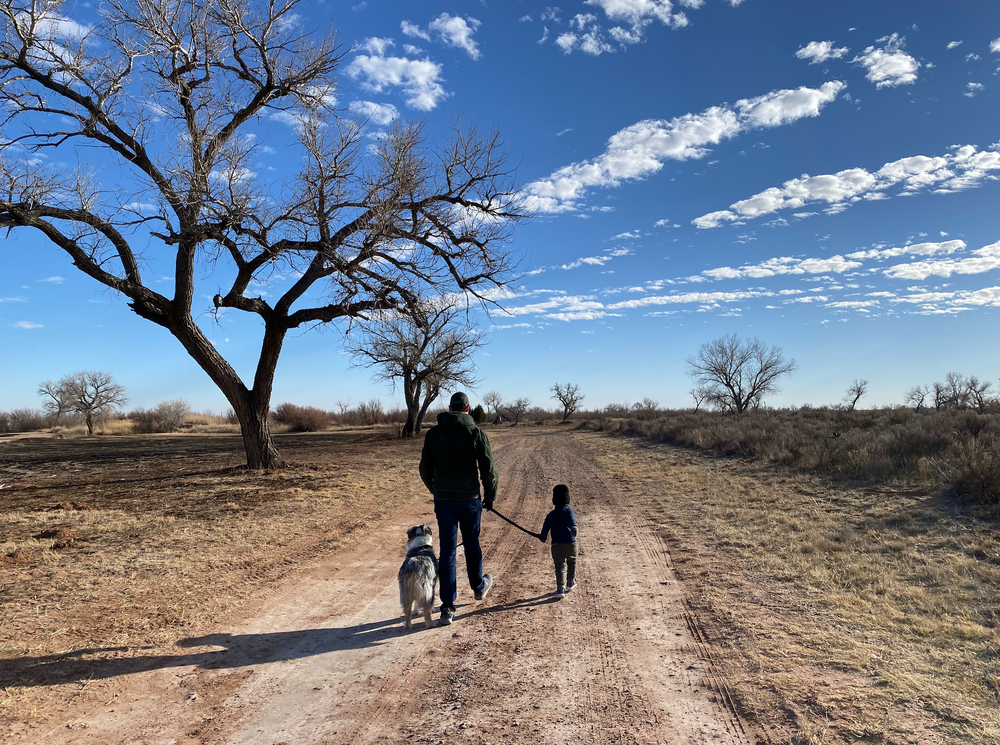 We woke on the 28th after a night of spotty sleep due to boofing dogs and packed up. After loading into the truck, I wanted to roll across the street to the gas station to inflate the travel trailer's tires. The pump wasn't working so I headed inside to find out why.

The local folk were friendly. A customer heard my inquiry and figured the caged pump had just turned off from to the cold. Yep. The lady behind the counter grabbed a key, opened the cage, and flipped the large air tank on. I gave at a few minutes to pressurize and was able to get the tires where I wanted. We set off. This time, to New Mexico.

The gas mileage was, you guessed it, better. Each tire only needed about 4psi but it helped.

Another easy drive. We passed some - MASSIVE - cow farms.

Each day we've been planning about a 4 hour drive with a stop around 11:30 to noonish at a playground so Owen can play and we can eat lunch, picnic style or in the RV. Today was our first trip without a playground stop planned.

Last night, we chatted and decided to shorten our daily drives to two or three hours instead. That decision led to scrapping some future planned stops. The site we're heading to now was a replacement for such a dropped stop.

The weather was uncertain. Rain was planned for the overnight in Silverton and potentially snow on our drive to New Mexico so we didn't plan a playground into things.

Neither did the snow.

I think this area is in dire need of rain; we passed an agriculture sign that read, "pray for moisture."

We stopped for lunch at a gas station in a bustling town full of semis hauling giant rolls of hay, cotton, and hogs. It was like an endless train of semis.

This stop gave us an opportunity for another first of our RV adventures, so we took it up! Time to empty the grey and black tanks. It went well.

We parked in the semi truck lot to make sandwiches and salad for lunch. Filled up on diesel and set off to Bosque Redondo Park, NM.

On the way we needed a few supplies. Another reason Ellie didn't sleep well during our stay in Silverton was our stock RV mattress. She wanted to try to find a foam topper at Walmart. She was successful! She returned to the truck with one and a couple other things. We continued on and arrived at camp. This was our first time arriving to an area that already had other campers there.

Nestled against a river, though I actually thought it was a pond, full of ducks of all colors and sizes, a few miles off the highway were four other campers. The winery in Oklahoma was empty but later a Mercedes sprinter van joined and the Silverton, TX spot was just us. But I digress.

The park looked to have recently undergone a controlled burn. The grass was blackened everywhere. We found our spot a good distance from the others, between two of them.

Said 'hi' briefly and got camp set up. We're getting speedy at this.

I hop out, level from side to side, then Ellie and Owen can go inside and get that set up. While they're inside, I level it front to back with the electric tongue jack. Then they extend our slide-out and I set down the stabilizer jacks.

On the drive in Ellie made sure to do some quick online research to see what dangerous critters take home in New Mexico. She found out about rattlesnakes and another poisonous type of snake they have and brown spiders of three types.

After we set up, we headed out for a family walk, with clear instructions to remain on the gravel road only. because maybe there are snakes to spiders amongst the shrubs and deadwood.

We followed the rules Ellie requested and made it back in one piece.

The next morning Owen excitedly shared that he was watching ducks out his window since he woke. That's one of many fun experiences he's getting from the journey.

I ground some beans for coffee, got the electric kettle going and tossed the grounds in the french press. Ellie and I enjoyed coffee while she and Owen puzzled and I did some RV maintenance outside in the cool morning air with ducks quacking nearby.

We finished packing up and hit the road!