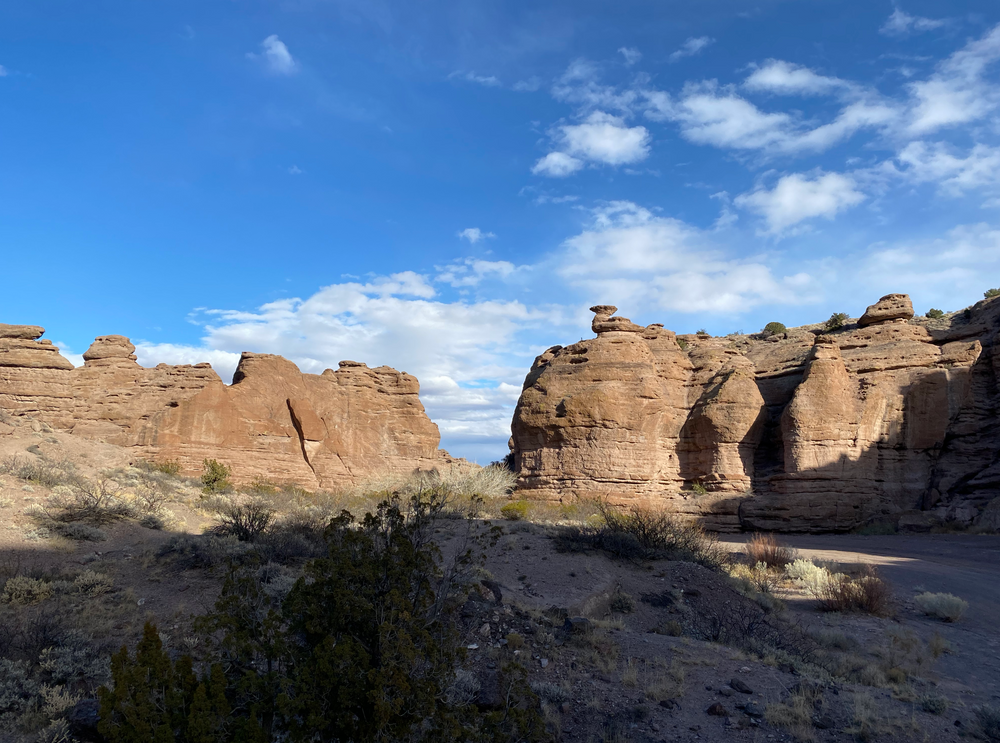 It's now Dec 29. We're leaving Bosque Redondo Park, NM to San Lorenzo Canyon, NM. This was the best scenery we've seen on a drive yet.

Mountains in the distance become closer until we were driving next to and then in them. Snow and rain falling in the distance. At one point, we had a handful of flakes hit the windshield.

After that, we hit a wide open plain that filled the void of about 30 miles to the next set of mountains. That terminated with a highway on ramp. The highway ran parallel with the mountains as we drove south to a gas station.

We arrived a bit later than normal lunch time, encroaching on Owen's regularly scheduled nap time. We arrived and parked amongst the semis. Got out, dropped the RV steps and made lunch.

After that I headed inside the station to make a supportive purchase and ask where their water hookup is. Spigot location locked in. We pulled the trailer over and filled it to about half. Now on to the best campsite we've boondocked at to date.

All day Owen was saying that he wanted to go into the mountains. Well, it was finally time to make that wish more real to him than it had been all day.

We headed down a frontage road, over cattle guards, for about five miles till we hit the BLM area of San Lorenzo Canyon. Owen was struggling to stay awake. He was battling his need for a nap and his desire to see the canyon and mountains. Our drive on the gravel road started with a bang.

We began with steep upward and curvy mounds, quickly proceeded by steep downhill sections. I changed the truck to four high to help with the climbs. On one descent, I felt the trailer start to slip the back end of the truck and I quickly reached to pinch the electric brake control for the trailer. That quickly straightened it out and stopped the push. Fun adventure moment that I didn't share with Ellie till the next day ☺. No need to add to her line of questioning if this spot was suitable for a set up like ours (it was).

The road was a few miles of rough gravel. We finally reached the canyon entrance. Owen had finally lost his battle and succumbed to the need to sleep. He'll see this part on the drive out tomorrow morning.

We drove all the way to the end of the canyon, I turned around to head back and find our spot.

I checked the canyon walls and visible tops to see if there was any small chance of a rock dislodging and making a breakfast dish out of us or our rig. All clear.

The ground was mushy, course sand, which led to me going out and tightening up our stabilizers multiple times throughout the evening because the plastic blocks we use under them kept shifting and settling into the sandy surface.

It was an awesome stay with fantastic views all around. We had pizza for dinner and I tested out the RV shower for the first time. Super cool having a warm shower in the middle of a canyon. Ellie showered and then filled a tub for Owen to take a bath. He had a good time and made sure we didn't forget to include his toys.

The next morning, I joined Owen in his bunk and we looked at the canyon out his window. He kept letting me know,

Must be a guy thing, Ellie had zero interest in that idea.