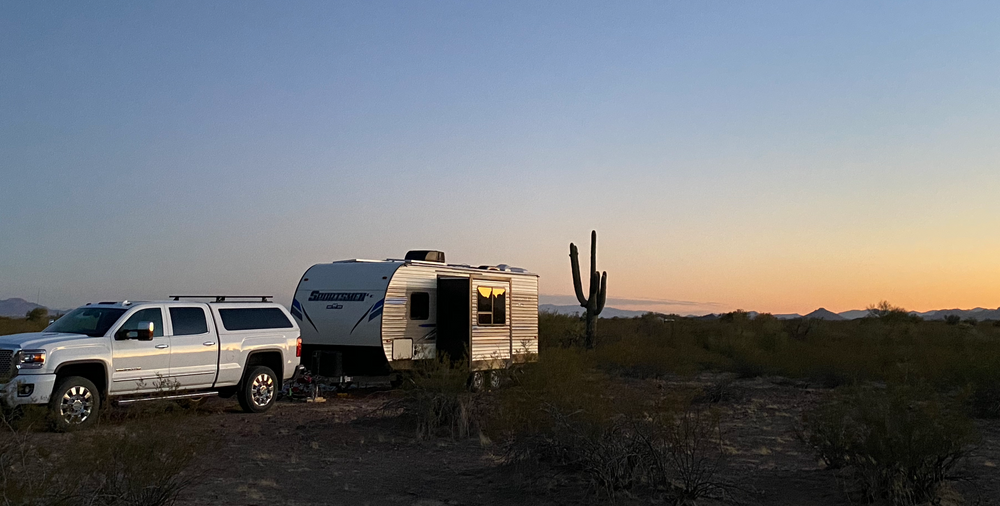 The next morning we woke to 12° F, feels lake 6° F. If we had continued west for only one more hour the previous day it would have been about 32° F. Not complaining, the brisk morning air as the sun came up and filtered through the trees around us was fantastic.

Today's drive was another beautiful one.

We tried to get diesel at one station and it was just dripping so I headed to another one down the road. The pumps were all taken so I pulled up behind a truck that also had an RV trailer that was pretty buried in the lot. After sitting there for about 5 minutes, no one showed up and our trailer was blocking people in who needed to back out and leave. I decided to go for it and get out of there and move on to another station many miles down the road. The only way out was reverse, around cars in the tight lot and the gas pumps. And I crushed it. I have to admit, I felt awesome after successfully reversing out of that. Simple thing but appreciating the small wins.

We came into Arizona and the landscape changed. Still mountainous but one section looked like blobby boulders were stacked up high.

We decided to treat ourselves to our first restaurant meal since hitting the road and stopped at In-N-Out Burger. Tasty meal.

Today's camp spot is in the Ironwood Forest National Monument in Arizona and it's our first time staying for more than one night. We'll be here for three. Looking forward to settling down for a few days and enjoying the stillness of the desert.

There are a few dirt roads off the main dirt road that brought us in. Down each are lots of free campsite opportunities. We drove a ways up the hill, past a handful of other RVs and vans and trucks, till we found a site we liked. Backed in and got set up.

There's a small airport near here that tows glide planes up and releases them. It was neat for a while but I eventually had enough of the small prop engines.

We spent the rest of the day outside exploring the area. Walked around amongst the cacti and bushes around our campsite.

The bushes have many animal holes dug into the ground beneath them. I think they may be from gazelle squirrels seeking food, though we haven't seen any such squirrel. Thinking about the holes, I started to wonder if the animal digger and the bush have some symbiotic relationship. Below the shrub, a good source a food for the critter. The hole dug by the critter, perhaps, helps water funnel directly to the root system of the plant. I don't know if that's the case but it could be? Probably a mystery nobody has solved to this day.

There are many Pasacana Tree cacti around. They're huge! Looking out from our campsite across the rocky, sprawling desert and seeing these scattered about with mountain views 360° around us has been an awesome place to stay for the last three nights.

We took the opportunity to get out our outdoor rug, chairs, and table. Nice having this weather and a place to sit and enjoy it.

The next day was just chilling out, Owen rode bikes, we hiked down the road a bit, and sat in the warm sun. Ellie edited video during Owen's nap while I wrote, read, and had a good chat with a great buddy.

We rang in the New Year out here. We didn't even realize it was New Year's Eve until the afternoon of the 31st. We didn't make it to midnight. It was a low key night compared to prior years. We put Owen to bed and enjoyed a few beers and chatted before hitting the hay. We could hear some fireworks throughout the evening off in the distance.

I'm sitting here writing this on the couch, while Bindi lays at my feet and Ellie is building DUPLO® with Owen.

We knew yesterday afternoon we would soon run out of water and that happened this morning. We'll soon set out in the truck to get a few gallon jugs for the few hours we have left before hitting the road to the Phoenix area. We're planning to begin that drive after Owen's nap. Not much more to share.

We're going to be stationary at our next spot for an undetermined amount of time. Blog posts will slow down because of that but I want to take that as an opportunity to do less adventure logging, as previous posts have been, and share some reflections of the journey so far, and maybe fill in the gaps prior to our first post.