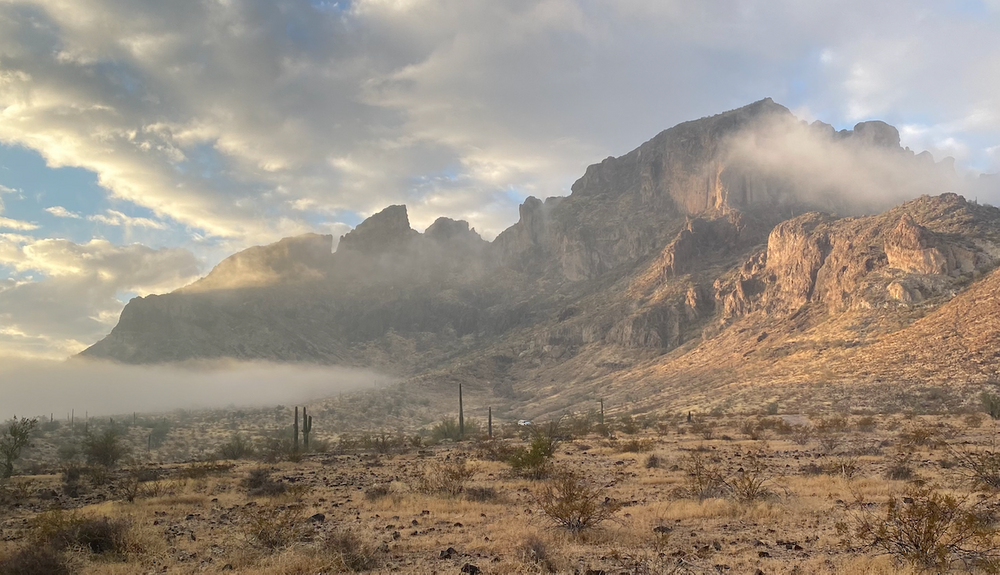 We left Sedona for better Verizon cell service and warmth and headed back south. The winding up and down drive along the rough dirt road was slow going before we reached the highway. We headed up and over the mountain that we came through on our way up. All went well. Along the way, we swung into a tiny gas station to refuel. It was almost too tight to get out amongst the cars, building, and pumps but we cleared it all by inches.

We were nearing Saddle Mountain and it was time to find a place to fill up our water tank at. We had picked a gas station nearby that an app we use told us had potable water. We arrived, took a drive around, and didn't see any. We gave them a call to check if they had potable water and they said no. Bummer. We needed to find another way. The sun was getting low on the horizon, Owen was tired of being in the truck. Silly as it may sound, these are good testing moments for taking a breath and understanding we'll figure it out and while it feels stressful, it's not a huge deal.

We searched around on various apps for any water in the area and found a ranch nearby. We drove in its direction, which happened to be on the way to our final destination. We parked out front, along the highway and called the number.

"Hi, we're going to be dry camping in the area and are looking for potable water to fill up with. Do you have any?"

"Are you the one parked out front?"

"Cmon in through the gate. We have a potable water spigot near the building on the right."

We drove in and he met us out there. We filled up and, learned something new that seems so obvious now. We used to only fill up our water tank until the sensor said it was full. He said to keep going until it's overflowing out of the fill valve. I mean, sounds good to me. Hopefully doing that would mean we would not run out before a week has passed like it did previously.

We chatted while the tank filled and Owen explored the plants. In our chat, it was revealed there were turtles inside so Owen and Ellie headed in to check them out. I finished up the tank and went in to wrangle the crew. We said goodbye and headed for the mountain.

The drive wasn't far from there, probably 3 or 4 miles to the entrance. It's easy to miss if you're not looking for it. There are no markings, it's just a turn off the highway between some plants, over the ditch. Once there, we meandered on up the mountain.

I checked my cell service quickly after turning off the highway and it was full strength LTE on Verizon.

"Sweet, this is going to be a great spot for working over the next two weeks." I thought.

We continued up the road, getting closer and closer to the mountain. We were looking for a decent spot with enough room on the road for us to back into and finally found it. We backed in and got situated. It was a nice day off on a Monday, the sunset greeted us with a warm welcome.

I got the RV setup outside while Ellie and Owen headed inside to get things situated. We got Owen to bed and then I re-checked the cell reception for tomorrow's work day. It was not workable. I initially assumed we had gotten too close to the mountain and it blocked the cell tower from getting to us. After researching cell tower locations later, I'm not sure what the problem was. I ended up putting up the WeBoost antenna for better signal and it worked great. The week ahead seemed fantastic.

This was my first time working out on the road. It started great. There were a few annoyances of poor connection while on some calls and super heavy winds that required me to take down the telescoping pole. Overall was great for the bulk of the time.

Our move here from Sedona ended up being for the better. We stayed for two weeks at Saddle Mountain and during our stay some decent storms rolled through. We got around 60 mph gusts and torrential rain. As it moved east and further north, it was snow. Sedona area got a pretty good helping of the stuff. We fared quite well, all things considered.

In the evenings, we'd go for a walk along the gravel roads that connect the various campsites along the mountain. Once or twice, Owen joined me for a bike ride in his seat attached to my seat post. We'd explore the rocks in the area. There are so many to look at. Here are some of the neater ones we found.

On our first weekend out there, we set out one morning for a family hike. The plan: follow the road that Owen and I had biked part of to see where it went once it reached a higher point on the bottom side of the mountain. We took Bindi with and hoofed it.

Owen did a great job walking himself much of the way up. Once up to where we were aiming, Owen had a snack break while I gandered around for ways to go higher. There was a pretty clear path up to another great nearby lookout spot so I asked Owen if he wanted to go home or go higher. The boy chose higher. It was a quick walk up to the next spot where we sat for a bit to soak it in before heading back home.

On our way home, we passed by a nice retired man with a new puppy. We chatted for a bit and Owen met the puppy before we parted ways to make sure Owen would get his next meal on time.

That same weekend, we hitched up the travel trailer and pulled it down the mountain and over to the nearby ranch to dump and refill. Remember how we ran out of water in the RV after just a few days in the past? And how this time we filled till it was overflowing? We had enough water to last us the whole week, and then some. Winning!

For our upcoming and final week at Saddle, we got set back up at the same spot as the last six or seven days. The work-week went fine, the winds were tamer. The weather was clearing up nicely. Throughout our time there, Owen and I would approach the mountain and scout trailheads to see which looked like the way up.

Finally, on our last afternoon there, it was time to attempt a summit of the mountain we had been living in the shadow of over the last two weeks.

With zero research on how to summit, we set out on foot. Ellie, Owen, and me. We quickly lost the trail and weren't sure which way to go. We just sort of made our own way up toward a spot in the mountain that looked like it went up. When we got to the mountain wall, it got steep pretty quickly. We made our way up and before long reached a sort of saddle between two parts of the mountain. We hadn't been at this for very long but quickly gained elevation to where the view was fantastic.  The winds were pretty strong in this funnel as well.

That was looking like it would be it for Ellie and Owen. With the uncertainty of what remained beyond and the already fantastic view earned, they hunkered down for a snack. But, having checked cell reception so we could communicate if needed, I set out on my own.

After a brief jaunt upward, the terrain leveled out for a bit and it soon felt like an entirely different world, far removed from anyone and anything.

Ellie and Owen texted that they were heading back down and it was a smooth trek for them.

Back up on the mountain, there was no one around, our truck and RV looked tiny, yet the mountain still towered overhead. The enormity of Saddle Mountain started to settle in.

I continued along, often choosing his own route up and around things since there wasn't a single defined trail, just many of them. I eventually got to a part that was a short climb up but quickly terminated at a towering rock face. There was no apparent way up or around it. The trail stopped here. The view was awesome though. The timing wasn't going to allow for a course correct before sundown today, it was time to start the trek home.

The descent went (mostly) smoothly. I thought I found the trail I missed that would've gotten to the summit but after a celebratory beer, did some online research and discovered a well written guide on how to summit Saddle Mountain, AZ. As far as summiting goes, we had taken the wrong trail from the start. Knowing that, I really want to get back there to make it to the top.

Time will tell if we'll get pulled there again.

For the regular readers - Sorry for the delay between posts. Many of the drafts I had started were in a writing app built on blockchain tech and that blockchain tech changed without warning and broke the app's access to everything, and therefore, my access. Kind of lost? That's fine, I'm not completely sure what happened. My drafts and notes are gone. We'll carry on.